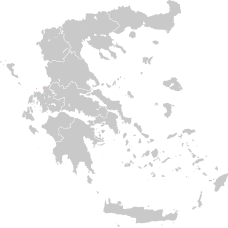 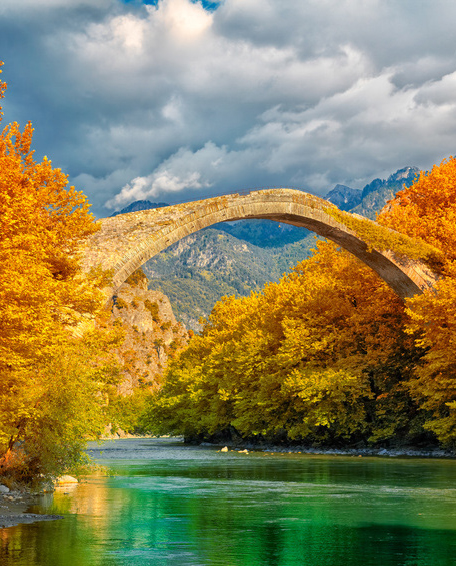 Epirus is without a doubt one of the most stunning provinces in Greece, and one of the most breathtaking and dramatic in Europe. Its natural landscape includes rock canyons and waterfalls, lakes and streams, and golden beaches with clear turquoise waters. This is one of the most unique regions of Greece both for nature walks and extreme activities on one hand, and short nature walks that are not strenuous, on the other. Merging all that with great food and fascinating culture makes a trip to Epirus and its subprovinces, Zagorochoria and Tsumerka, really enjoyable.

Right here is where you'll get a first taste of Epirus. But anything we might write is dwarfed by what you'll see when you actually visit. A trip there is an experience for all your senses. Epirus is the fourth largest province in Greece, the larger ones being Macedonia, Thraki and Thesalia. But none of those three offer such amazing diversity, although they certainly have their highlights.

Epirus spreads across some 9200 square kilometers between Preveza in the south west, the eastern ridge of the Pindus Mountains, and Konitsa in the north. This region boasts some of the highest peaks in Greece, such as Tsumerka and the Astraka range in the northern Zagoria villages. It’s also considered the most developed area of Greece for walking trails and serious treks.

The ultimate time frame for treks in Epirus is from early April to the end of November. Spring is when you'll find the best flow of water, and mountain peaks in full blossom in April, May, June and early July. August still offers pleasant weather, and most streams will still be flowing. But August is peak tourism season and if you're figuring on a July or August visit here, it’s best to make your plans as early as possible, from hotels to treks and other attractions that can be booked in advance.

September and October are beautiful times of the year and pleasant for trekking, but the nights tend to get chilly. Greece, not being too far north, continues to enjoy abundant days of sunshine through October and November. November is the month for classic autumn trekking, a beautiful season in Epirus, with tourists from across Europe coming to see the colors. Winter begins in December and ends officially in early March. The Zagoria and Tsumerka villages offer beautiful sights although temperatures tend to be low and mountain peaks are snow covered. This season is especially suited to people who've already visited Zagoria and Tsumerka in warmer months and have fallen in love with the region. Believe me, more and more people are falling in love with it!

How much time should you plan for in Epirus?

Aim for 10 full days here. That way you'll get a bit of a feel for Tsumerka, the Zagori villages, and Ioannina and Metsovo. You might even manage to fit the western coast of Epirus in.

Two weeks and more will let you more fully enjoy a wider range of trips and attractions in these Greek provinces. Many tourists combine their visit in the area with a trip to other parts of Greece, but base the focus of their vacation on Epirus, considered the most beautiful of Greek provinces.

Known for its unique and picturesque villages, the Zagorochoria region, generally shortened to Zagori, is in the northeast part of Epirus. Trekkers usually come here for the spectacular nature surrounding the villages, which includes Vikos Gorge, the deepest rock canyon in the world; the Voidomatis River, known for having the clearest water in Europe; the Vikos Aoos, a nature reserve recognized by UNESCO; and many other hiking trails through virginal nature, waterfalls, lakes and more. Feast your eyes on nature’s beauty, and enjoy the Greek taverns famed for their fresh local produce. Go rafting, go canyon climbing, ride horses: part of the many activities you can choose in one of the lushest areas of mountainous northern Greece.

The Tsumerka region contains one of the most untamed areas of nature in the entire Epirus province. You'll find it south east of Ioannina. Tsumerka’s national park recently joined the Europark list and has already been noted as one of the top 12 best preserved of Europe’s national parks. In Tsumerka you'll find tall mountains, rivers, springs, waterfalls, charming villages, a variety of trails, extreme activities such as rafting, and numerous paths for lighter walking as well as an excellent tourism infrastructure which melds with nature rather than overpowers it. Roads which in the past were problematic are being upgraded, making it easier than ever to visit this amazing region in the mountainous northern Greece.

Good to know Before you come..

"Book a hotel according to the recommendations on this website and come travel with us, you can get all the information about routes and attractions here on the website or from the locals who will be happy to help"

"It is recommended to book at least 3 nights in Zagori, and another 2-3 nights in Toumerka or Ioannina, for a trip to these two spectacular areas."

"The area includes a variety of hiking trails at all levels with breathtaking nature, there is also the possibility of rafting on two of the most spectacular rivers in Europe, the Arachtos and the Vidomatis [the clearest river in Europe]"

"And of course don't miss a visit to Vikos, the narrowest deep rock canyon in the world according to the Guinness Book of Records"

Do you have a question? Need more help? Contact us in English and we will be happy to help. Greece.isl@gmail.com